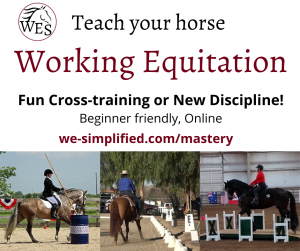 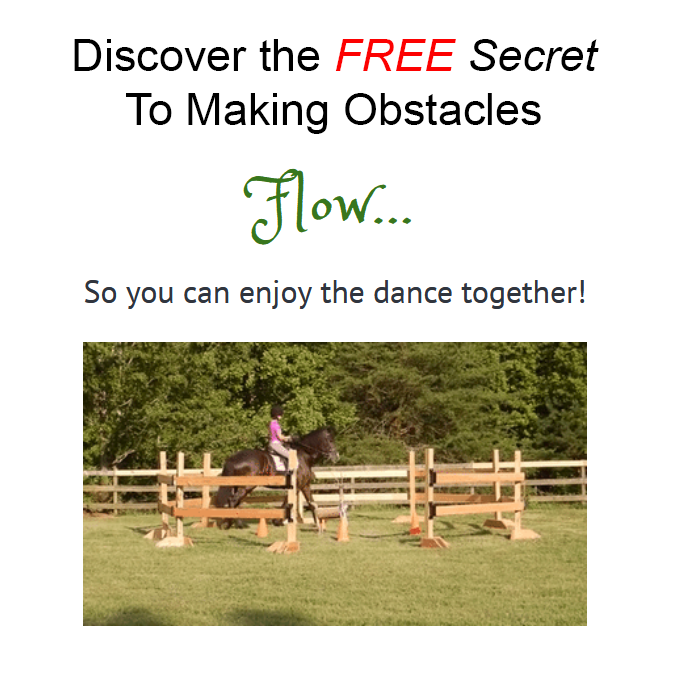 Easily Teach Your Horse To Lengthen And Shorten Strides

Question: How Close Should I Be To The Bull?

Drifting Away From Obstacles

The Secret To Flow Through The Obstacles

Question: Should I Circle The Pen in Working Equitation?

Question: Which Direction To Turn ​For ​The Pen?

What Type Of Direction Change For The Pen?

Approach To The Pen 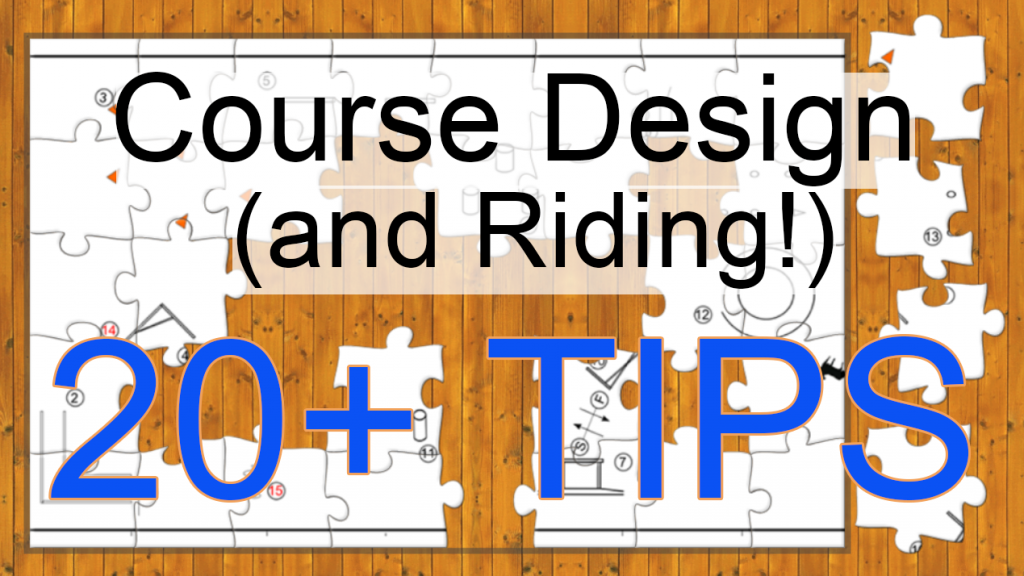 I wanted to share with you the Course Design (and Riding) Tips for Working Equitation that I have collected. Many of them come from conversations and maps created in my Course Design Camp, and with other riders and Judges.

But this is only part of what I have for you.
When you click the button and sign up for the Free online mini-course
" Course Design And Riding Tips & Case Studies" :

The Most Important Tip:

The most important tip, and you'd think this would be obvious, but unfortunately it's been my experience that it isn't.
Know your countries rules.

Know what the directives or execution of the obstacles involve so you can design courses that can be ridden successfully by the average horse, in their level.

If designing for different levels, make sure the courses gradually increase in difficulty.
That they include challenges that a rider can choose to accept or avoid depending on their horse's strengths.

It is the job of a course designer to create a fair test that enables the Judge to classify the riders performing it. And enables the riders to show what their horse is capable of.

The following, in no particular order, are some of the problems I've seen in course maps submitted in my Course Design Camp.

If you have other tips to share, or challenges you've seen that didn't work out well, I'd love you to share them with me.

Not considering if the course, or approach to an obstacle, is harder for the horses of either the right or left-handed group of riders.

Some things will be hard to make equal, but have you added a corresponding challenge for the other group of riders?
Sometimes a slight tweak to position or angle will make it a more fair test.

Here are some examples:

A Bull line that is too close to the wall will cause two extra bend/lead changes for one of the two groups of riders. In this case, the left handed rider in the second picture is unable to turn left due to the wall being too close.
It's even worse if it's also too close to a corner so there isn't room to change bends/leads on your approach.

Bull line set on a bending line which is the wrong bend for the hand being used.

The three components of the Bull line set too close together for the level riding them.
This causes the rider to have to interfere with their horse's tempo in order to have time to get the pole level to spear, or to reposition it upright for the replace pole.

30' (10m) between components, like the minimum for other obstacles, is a safe distance.
They can be closer if being done only at the walk, or once the level calls for collection at the gait required.

Another important consideration is which obstacles you choose to include between Bull Line components.
At the lower levels it is best to keep the Remove Pole, Spear Ring, Replace Pole as one obstacle. That way if the rider can not get the pole, they have only messed up one score. At for new riders only having Remove and Replace can be plenty for them to do.

At the lower levels, when you do start to break up the line by adding in other obstacles, consider that the rider will now be going one handed not two.
We are trying to set up a course that demonstrates their control, and scored like it's dressage.
Asking them to ride bending lines, when they can't even do them correctly two-handed, is not contributing to the progressive development of the horse.

Try to include an even number of left and right bent lines between obstacles to give each horse an equal opportunity to display their suppleness and balance.

The Gate set too close to a wall or other obstacle, will not allow for the perpendicular approach and down transition required in the rules. This distance will vary depending on the level riding it.
The approach needs to be in the travelling gait. If the gate is set parallel to the arena fence, a 1/4 circle will be required at that gait in order to approach it as the rules require. Then a down transition needs to be made to walk.

When you look at the Map in the Case Study, where the Gate is set parallel to a wall, you'll see whether the distance it was placed worked for the different levels and gaits.

The Gate can be very awkward in leadline and is best not used.

For the other lower levels it is a judgement call depending on how late in the season, and how experienced the riders, as to whether to include the Gate twice on a course as the rules allow.

Personally I like the Gate twice on a course as it makes it more fair.
Unless you are using a rope gate that opens at either end, one of your two groups, either left, or right-handed riders will have to go through the Gate backwards.
If the Gate is done twice then every rider has to go both forwards and backwards.

However, as the Gate is a very technical maneuver, there is a higher chance of riders being unsuccessful and at the lower levels using it twice can mean that two of their 8 or 10 obstacles are not successfully completed. So using the Gate once may be the better choice.

However this brings up another problem you must consider.
Most riders are right-handed and the Gate is usually set up so they go forwards, and the left-handed riders have to go backwards. And knowing that, riders will practice for that. However, if for some reason the Gate is set up with the hinges facing the other way, both groups will be presented with an obstacle that is being worked the opposite of what they had practiced. Definitely something you need to watch for when the course is set.

Courses should include a couple of shorter lines to create a challenge for the rider. This is where a rider can pick up extra points for increased technical difficulty.
If unsure, riders can avoid it by taking a longer approach. This shows the judge that the rider knows their horse, and its capabilities.

Include a couple of longer lines to give the horse a break from all the bending. But don't send them back and forth to the point where you are only testing endurance.

Courses should include a couple of bend/lead changes between obstacles.
But, Course designers should be aware of how many bend/lead changes are on their course, including within obstacles.
Lower levels should not have as many as each one is a potential resistance and we want to encourage progressive development of the horse and rider.

Don't include too many bending obstacles for the same reason.
5-9 Double Slalom poles, 5-7 Single Slalom poles, repeating them from the other direction, Figure 8, and Drums, 'could' all be used on the same course.
Consider what you are giving the Judge to judge and the capabilities of the average horse at that level.

There are 5 main technical challenges shown with obstacles.
- Straight without stopping.
- Straight with a stop.
- Bends, arcs, leads and changes.
- Reinback
- Lateral movement

Try to make sure your course contains obstacles that demonstrate each of these, at least once.

At the lower levels, try to begin with obstacles that are not too difficult or scary looking (sometimes the Bridge has a troll under it).
We want to set up the new horses and riders for a successful ride so obstacles like the Single Slalom and Figure 8 allow them to move and relax before the more challenging obstacles.

We want to help improve horse and rider's success and confidence by designing a course that allows them to showcase their strong points.

At the higher levels, if there are a lot of obstacles, try to include the ones that are harder for the horse physically, in the first half of the course. Like the Drums (3 Barrels) and Double Slalom
We are trying to help the Judge classify the riders, not just test endurance.

Courses at the beginning of the season should be less challenging than those at the end, at least at the lower levels.
Don't discourage your new riders with courses that are too difficult. But do give sufficient challenges that the Judge can classify the riders.

What looks good on paper, may not fit in the arena. Try to design your maps to scale so you can 'see' how they will 'ride'.
Your ability will improve with practice.
The setup time will be much shorter and less stressful.
And if you're the Judge you won't get a nasty surprise when the first rider goes through.
This is part of what I teach in Course Design Camp.

After 'riding' them (drawing her line of travel), she received feedback on what worked, what other options could have been used in the 'ride' and what didn't work based on the rules or the level.

When you sign up you'll get access to that set of maps, and my reviews, to help you train your eye and think about your choices when designing or riding a course.

You CAN learn how to improve your horse's skills from online courses and tips such as these.
But only if you implement.

So when you read my articles write down the steps or thoughts that come to mind as a reminder for what you're going to try in your next ride.
Come on back when you're done and let me know how it went.

Before you go to the next article,
I'd love to read your comments and answer your questions below.

If you don't already receive my emails, please sign up to be notified of new articles, and free and premium educational offerings.

Trish's superpower is the ability to give you and your horse what you need, in a way that you understand, so each horse and rider makes progress and knows what they need to work on.

She puts her many skills to use introducing the international discipline of Working Equitation to riders eager to improve their partnership with their horse, with a focus on fun, classical horsemanship and use of the horse for practical work or as cross-training for other disciplines.

Please log in again. The login page will open in a new tab. After logging in you can close it and return to this page.